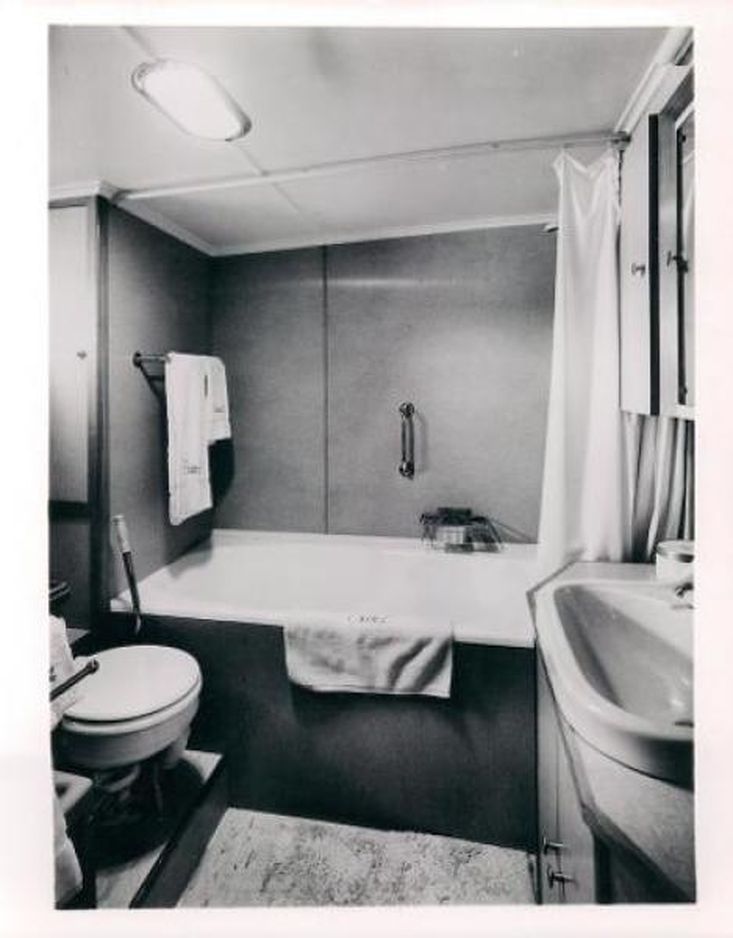 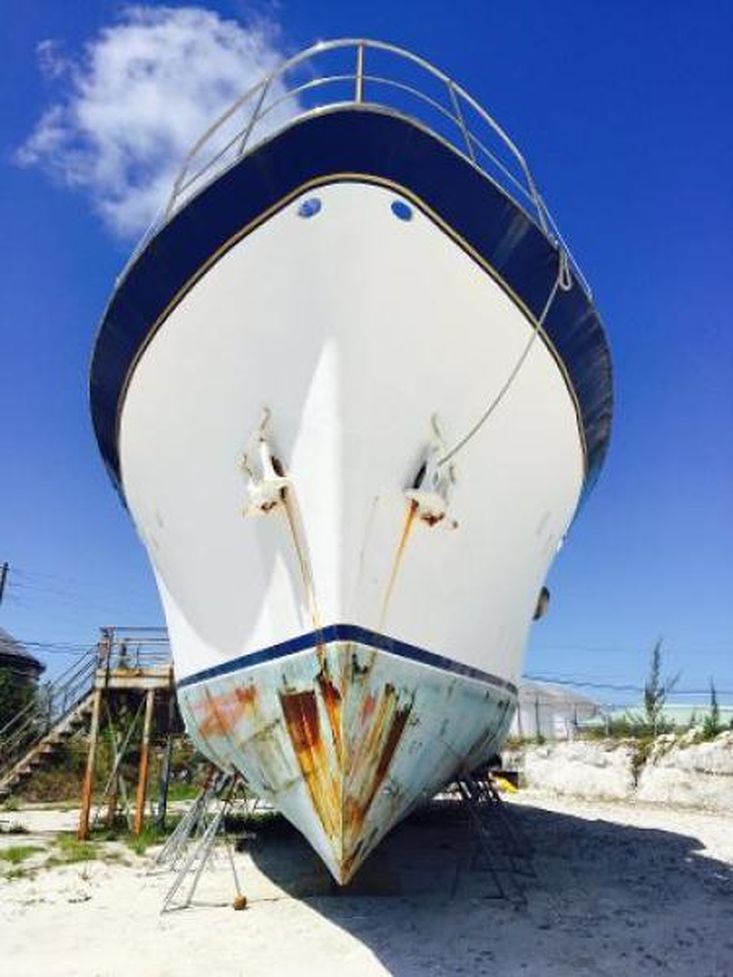 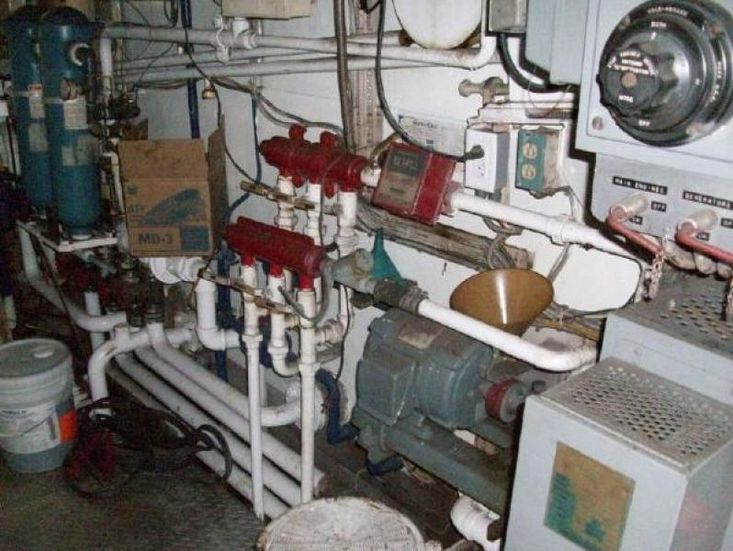 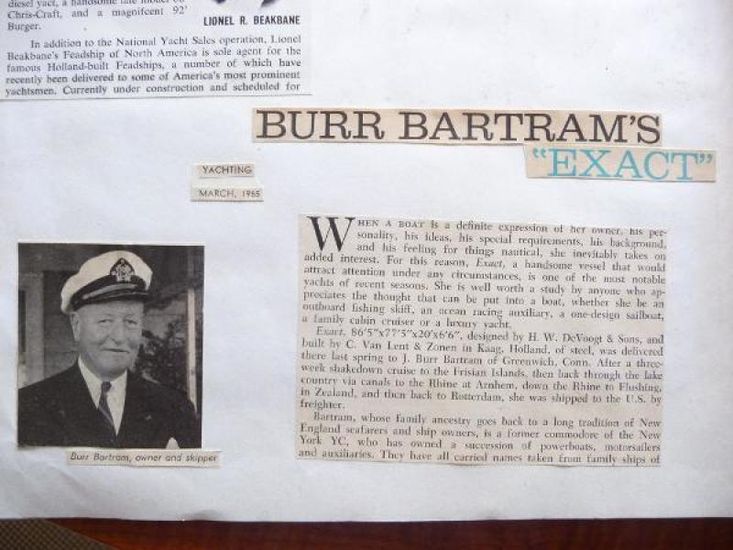 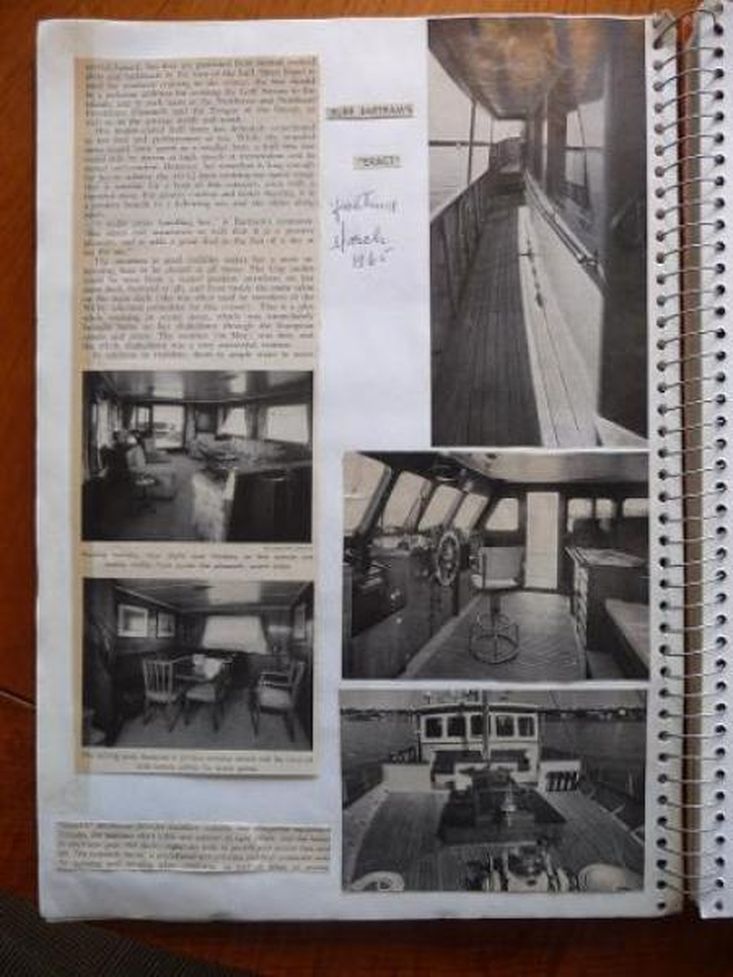 
Originally launched as 'EXACT' - this 1964 86ft Classic Canoe Stern Feadship is in need of a complete refit/rebuild. She is currently on the hard in Freeport, Bahamas at Bradford Shipyard. The hull is pitting and estimated to take 6-8 months to rebuild at a cost of approx. 500,000 EURO. Man-hours fo


When a boat is a definite expression of her owner, his personality, his ideas, his special requirements, his background, and his feelings for things nautical, she inevitably takes on added interest. For this reason, EXACT, a handsome vessel that would attract attention under any circumstances, is one of the most notable yachts of recent seasons. She is well worth a study by anyone who appreciates the thought that can be put into a boat, whether she be an outboard fishing skiff, an ocean racing auxiliary, a one-design sailboat, a family cabin cruiser or a luxury yacht.EXACT, 86'5"x77'5"x20'x6'6", designed by H. W. DeVoogt & Sons, and built by C. Van Lent & Zonen in Kaag, Holland, of steel, was delivered there last spring to J. Burr Bartram of Greenwich, Conn. After a three week shakedown cruise to the Frisian Islands, then back through the lake country via canals to the Rhine at Arnhem, down the Rhine to Flushing, in Zealand, and then back to Rotterdam, she was shipped to the U.S by freighterBartram, whose family ancestry goes back to a long tradition of New England seafarers and ship owners, is a former commodore of the New York Yacht Club, who has owned a succession of powerboats, motorsailers, and auxiliaries. They have all carried names taken from family ships the era of sail, and EXACT is named for a bark built in Derby, Conn., for Bartram interests in the 19th century."We have had boats for racing, for cruising and for fishing," Commodore Bartram explains it, "and this time, frankly, we wanted a boat for comfortable spectating at the America's Cup trials and other races that would also be a good cruising boat. This meant she should be comfortable to live aboard for long periods, have good visibility from anywhere on deck, be a good sea boat, and be easy to handle and maneuver. She has really worked out very well in all these demands, and we are very pleased with her."Bartram is one of the few owners of yachts this size who likes to be his own skipper while aboard, although he does, of course, have a professional captain and crew. He is particularly enthusiastic over how EXACT handles, for a boat of her size, in a seaway while underway, in a large spectator fleet, and in maneuvering in close quarters in such a crowded spot as Newport, R.T., was last summer.Her twin screw 336 hp. HM V-8 diesels, permanent fin stabilizers and double-ended hull, all requirements Bartram worked out with the designer, along with many details of her layout and arrangements, all contribute to her performance and ease of handling. The stabilizers definitely dampen rolling and provide a much more pleasant motion at sea. Since Newport's well-known swells were larger, on the average, last summer, than in many other years, this meant a great deal of extra comfort in watching the 12-Meter races. The only drawback to the fins is that care is needed while docking, as they cannot be retracted, as can some models. Any pilings that slant out under water are a special hazard, but they are protected from normal vertical piers and bulkheads by the turn of the hull. Since EXACT is used for southern cruising in the winter, the fins should be a welcome addition for crossing the Gulf Stream to the islands, and in such spots as the Northwest and Northeast Providence Channels and the Tongue of the Ocean, as well as on the passage north and south.Her double-ended hull form has definitely contributed to her feel and performance at sea. While the rounded stern would limit speed in a smaller boat, a hull this size could only be driven at high speeds at tremendous cost in money and comfort. However, her waterline is long enough for her to achieve the 10-12 knot cruising top speed range that is sensible for a boat of this category, even with a rounded stern. For greater comfort and better steering, it is a positive benefit in a following sea, and she slides along easily."I really enjoy handling her," is Bartram's comment. "She steers and maneuvers so well that it is a positive pleasure, and it adds a great deal to the fun of a day at sea for me."The attention to good visibility makes her a more interesting boat to be aboard at all times. The Cup yachts could be seen from a seated position anywhere on her main deck, forward or aft, and from inside the main salon on the main deck (she was often used by member of the NYYC selection committee for this reason). This is a plus while cruising in scenic areas, which was immediately brought home on her shakedown through the European canals and rivers. The weather (in May) was fine, and the whole shakedown was a very successful venture.

As mentioned in the 1965 Yachting Magazine article, this gorgeous Feadship was originally launched as EXACT in 1964 and specially designed to be the committee yacht for the 1964 America's Cup race. She was later named ANOATOK where she was lovingly owned by the same family for 22 years. She is well know having cruised extensively along the Eastern Seaboard, Gulf of Mexico and throughout the Caribbean.

She is now available for sale for the new owner to continue the refit & restore her to the grace and elegance she deserves. Currently all of the carpeting has been removed and some cabinetry and floorboards in the lower cabins are up to access the inside hull plating for inspection.

It has been estimated that at least 1/3 of the bottom needs re-plating. The bow area in particular needs a major amount of frames and plate work. The hull will need to be partially restored on location so she can float and be transported to a facility for refit

The deck is also in need or replacement and water has leaked within forward in the dinning room and crew areas.

This is a mechanically sound vessel having regular maintenance but she requires some attention to the hull plating and pipe work as would be expected in a vessel of this vintage.

She is currently out of the water at Bradford Marine Bahamas and easily inspected.

In order to properly gauge the condition of the yacht I looked to the advise & guidance from Lody Reimersma of Lotronics, Netherlands whose team focuses on classic Feadship's of the Heritage Fleet having completed impressive refit projects such as OLYMPIA.

Lody inspected the yacht for a potential buyer and has over 400+ additional pictures & video that can be shared with a potential Buyer. His opinion is that total cost for the refit would be approximately 3.5-4m EURO. The hull alone will require an estimated 7,500 man hours and 6-8 months to rebuild costing roughly 500,000 EURO.

Transport to the Netherlands would be roughly 120,000 EURO and we have been in contact with a transport company specializing in yacht transport for a vessel in this condition.

There is already a complete team in place at Lotronics who can finish the refit, and work can also be coordinated with Feadship Makkum and Aalsmeer.

I welcome a conversation with any serious buyer or broker who could be interested in this project. We have additional pictures of the interior, exterior, machine spaces and original drawings that are available upon request.

Thank you for your time.

On May 16th, 2015 a personal inspection was made onboard. Over 200 pictures were taken documenting her current condition both on the interior, exterior, hull, flybridge, engine room and running gear.


These pictures are available upon request and I am happy to discuss the overall condition and requirements of the rebuild.

This classic canoe stern Feadship offers excellent potential. Plate work on the hull is required prior to relocating her.

Boats for sale
by continent

Boats for sale
by country